The Tonnage Rat: Rockslide Fixers of the Mountains

The Tonnage Rat (a.k.a. the Engineer Rat) is a species of colonized, reptilian-like rodents that live in large burrows in the mountain sides throughout the Rockies and the Appalachians of the United States. This creature barely comes out of their burrows unless food and water supplies run low. The Tonnage Rat in appearance are large, slim rats with some reptilian-like features underneath their fur. They are insectivores and only hunt underground unless the need to search for more food comes. The Tonnage Rat are the favorite prey of avian predators such as eagles and young Thunderbirds. This rodent-like creature only comes out from its burrow if a rock slide occurs that exposes the Tonnage Rat's burrow. After a rock slide occurs, hundreds of these rats race against time to recover the rocks which exposes their homes by placing them back in correct order. This usually takes about two hours for completion unless a predator arrives then it would take longer. These modern day synapsids (prehistoric mammalian reptiles) do lay eggs but, these large eggs are squarish in shape and are stacked amongst each other to keep them warm. 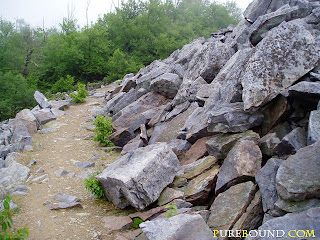 The photograph above is of a rock slide. Usually the Tonnage Rat does re-fix the rocks into their correct place unless the natural disaster doesn't expose their burrows. The greatest threat to these creatures are the Slide-Rock Bolters of Colorado, which created rock slides to capture prey.
Posted by Shane Young at 11:34 AM