The Death Crawler: Giant Killer Centipedes of the Amazon

Scolopendra gigantea, or the Amazonian Giant Centipede; isn't the only deadliest Scolopendra living in South America. The Death Crawler (named after it's deadly reputation) is a large, venomous centipede that is considered to be the most feared arthropod in the Amazon. Death Crawlers can reach up to three feet by adulthood but, there are some cases in which the insect can grow up to five or six feet. They're both silent, and quick, which in the field of Monstrology; is a deadly combination, and are capable of stalking their prey from almost anywhere in their habitat (includes the canopy, underneath the earth in tunnels, and even over top water). Prey varies on size but, the arthropod has been reported to kill, and consume monkeys, caiman, capybara, and even humans. Death Crawlers have a few ways to attack like for example, if the prey is a caiman in the water; the large centipede would silently approach it's prey before constantly biting and wrapping it's body around the surprised meal. Death Crawlers, like all centipedes; have the ability to bite more than once which releases more venom into the poor creature attacked. They're also known (like in the example mentioned above) to wrap their bodies constantly around their prey in order to deliver more effective bites. This will only happen if the animal is smaller than its prey or the animal needs to quickly overpower it's prey to prevent escape.

Death Crawler venom, like their smaller cousins; is five times the dosage to help bring down larger prey. Symptoms of a Death Crawler bite vary upon each individual but, they usually start with severe pain, chills, weakness, fever, and finally death. Death Crawlers are creatures which must be totally respected while travelling through their territories. These large centipedes are known to be extremely aggressive and must not be taken as a joke because these creatures will attack, kill, and even consume you. If a Death Crawler crosses your path; do not run because they can easily catch up to you, and never provoke it to attack. Holding still and not making any noise will definately save your life. Anti-venom, if bitten; is possible but, must get ahold of it within a few hours before death depending on how many times the centipede has bitten you. Killing a Death Crawler is quite easy but, setting on fire is usually the best way to exterminate one. Having one as a pet isn't the best idea but, is possible. 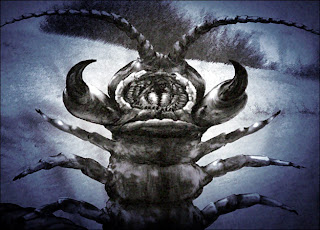 Handling a Death Crawler (shown above) is never a bright idea due to their large size, strength, quickness, and ofcourse it's fatal venom.
Posted by Shane Young at 5:35 PM No comments:

The Rake: Misidentified Ghouls or Something Else?

Ghouls are one of the world's most dangerous and common undead predators ever to walk the Earth, alongside the zombie and vampire species. Ghouls first originated from the Middle East before spreading to the rest of the world in different shapes and forms. The Ghoul family tree consists of four species: the shape-shifting Ghoul that scurries along graveyards/deserts searching for prey, the Forest Ghoul which lives mainly in the canopy, the Ghast which is like a 'super-ghoul', and the Invunche; which are large deformed and vicious ghouls found in Chile. Now there may be another species out there, hiding within the deepest, darkest parts of North America's woods. The Rake is a pale, ghoul-like creature with long, sharp claws (hence the name due to the claw's appearance to be quite similar toward the gardening tool of the same name) and nothing really is known about these creatures. The only things that are known by Monstrologists is that it's appearance is almost similar toward the Forest Ghoul (which is sometimes mistaken for) from a distance until the claws come into view. The Rake is also very dangerous, predatory, and are silent as they stalk their prey. Rakes only attack when their prey is unaware of their presences (usually as it's victim is asleep) before goring and tearing the poor creature. It is theorized by Monstrologists that the Rake, like the Phase Spider, can 'teleport' itself into another dimension to allow the creature to easily stalk and hide form their prey before committing the final blow. Killing a Rake is unknown but, it is logical if someone can get a clean shot before it escapes out of sight and out of our own plane. 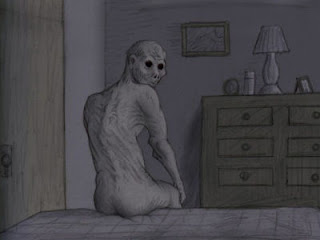 Above is an illustration of a Rake, which is almost human-like; that makes this creature extremely unpredictable and frightning.
Posted by Shane Young at 12:57 PM No comments:

The Joystealer is an elf-like creature whom feeds off emotions from their victims and are very seductive into doing so. Joystealers are elf-like in appearance but, have extremely pale skin (sometimes with a purplish tint) with long hair, and seem androgynous at first glance. The only way to tell between these creatures and elves are their gem-like, pupil-less eyes which seems to "hypnotize" their unexpected prey. Mixing traits with psychic vampires (the way they feed), elves (appearance), and even succubi (seductive abilities); this is a species that nobody wants to confront. Their favorite prey are humans and elves whom don't see through their tricks and seductive techniques. Joystealers are usually found in urban areas (especially near waterfronts and slums) where shelter, food, and a water source is provided for them. Prostitution is the most common way both genders seem to hunt by luring both men and/or women of both races into traps. Being solitary hunters, Joystealers don't occasionally join together unless it's an orgy-type party. There are many ways on killing a Joystealer such as shooting, setting on fire, brutally beating, etc... but, the most effective way is starving it to death. Saying 'no' and ignoring the predator's advances is the most common way to get rid of a Joystealer due to the creature's nature. Another effective way is staying away from their hunting grounds with a crowd of people. Joystealers, though persistent; tend to stay out of sight during the day and crowded areas. 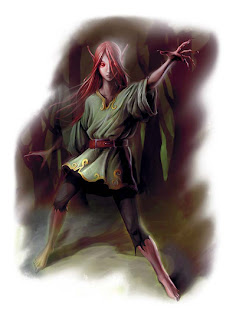 Joystealers (above) are related to fey folk such as fairies, pixies, and elves.
Posted by Shane Young at 12:22 PM No comments: