The Dōmo-kōmo: The Japanese Species of Ettin

The Dōmo-kōmo is a human sized species of Ettin (two headed Giants) that live around Japanese towns or cities in the forest filled mountains. Rarely appearing in urban areas, the Dōmo-kōmo will only travel into populated areas if their prey sources are running low or if an environmental threat is currently occurring. Unlike most species of Giant, the  Dōmo-kōmo is carnivorous and will consume humans if a chance arrives. Humans, though not their normal meal, can fall victim with this very intelligent creature. Intelligence varies amongst individuals and will determine if the creature is a threat or harmless. Rodents, birds, other small mammals, most reptiles, and children can be easily killed by a large enough specimen (ranging between 7.5 to 8 feet tall). The Dōmo-kōmo are known to use either brute strength or murderous tools such as knives or axes to successfully kill their prey. Like Ettins, each head controls one set of the body: the left head controls the left side and the same with the right. Usually the right head is more of a leader for the left head to follow but, the Dōmo-kōmo differs because most individuals seem to be equally the same giving this species a greater edge on survival. Killing a Dōmo-kōmo varies but, killing at least one of the heads will either stun the creature or will cause the remaining head to control the entire body which would cause the creature to tire quicker. 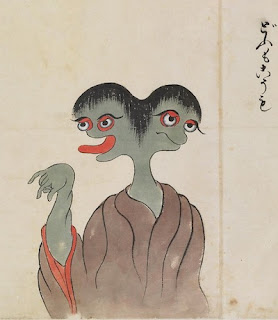 The Dōmo-kōmo (illustrated above) were once to believed to be Oni (Japanese "Demon" Ogres) which later turned out to be related to Ettins, which are only found in isolated areas in Europe.
Posted by Shane Young at 2:33 PM No comments:

The Howler Wasp: Deadly but, Practical

An 'aberration' is a strange beast that had adapted to any environment in a more bizarre and different way then other creatures. The Howler Wasp is an example of what an aberration is and considered to be one of the dangerous. Half-primate; half-insect, the Howler Wasp is an social animal and are known to hunt in swarms. Being extremely aggressive and hostile to other creatures, the Howler Wasp is a monster that shouldn't be encountered (including the most experienced). They're known to live in large nests that are made with any surrounding materials such as dry leaves, rocks, trash, and even the bones/skin from their victims. The Howler Wasp is part of a 'hive mind' community, which mainly means that the queen of the nest controls all of the workers which surround her making them mere clones of different sexes. The Queen Howler Wasp is much larger than all the workers and is about the size of a small pick-up truck. The drones (or workers) can grow up to the size of a medium sized dog. Life spans for the workers can only last up to six months but, the Queen can last for years.  Howler Wasps are carnivorous and will hunt down any living organism that happens to come into contact of their nest. Usually, a single Howler Wasp will travel up to ten miles to search for a large source of food.

On the attack, the Howler Wasp's venom can easily paralyze a human within seconds, leaving them defenseless against other attacks. Howler Wasps either attack with their stingers, the scythe-like arms, or their powerful jaws with sharp teeth. If a Howler Wasp is wounded, the creature indistinctly sprays their attacker with a pheromone which signal others to attack. Water is the only way to wash away the pheromones. There are only a few of natural enemies of the Howler Wasp which mainly includes giant species of arachnids. They're known to survive in almost any habitat except for in extreme cold temperatures. Howler Wasps are mainly found in warm climates such as rain forests, temperate forests, and even deserts (mainly in the Middle East). The best method on killing a Howler Wasp colony is the use of fire or quickly exterminate the Queen. 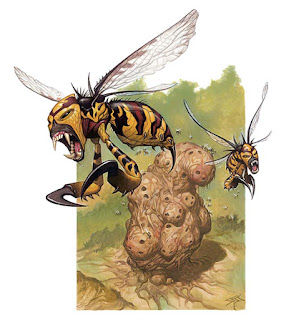 Once a Howler Wasp's nest (shown above) grows too large, experienced exterminators must be called in before the colony gets too large to contain for both human, animal, and even environmental safety.
Posted by Shane Young at 6:59 PM No comments:

The Forest Ghoul: Hiding in the Canopy

The Forest Ghoul is a species of ghoul that lives in the canopy of remote North American forests throughout the country. This species is mainly nocturnal and will hide out of view during the daytime hours. In appearance, the Forest Ghoul is slender and more equipped for climbing tall trees with their long, bony hands with sharp claws used for digging into the bark to successfully get a grip. Unlike the common Ghoul (that are known to shape-shift and are mainly found in graveyards eating the dead), the Forest Ghoul hunts for prey ranging from small rodents to deer on the ground at night. Humans aren't their favorite prey but, they will attack if threatened. Forest Ghouls are quite shy creatures but, can be dangerous if somebody threatens their homes (which are mainly inside trees). Unlike ghouls, this species doesn't have the ability to transform a human into their own species (see 'Ghoul Fever' in "Seven Common Diseases and Illnesses in the World of Monstrology") because the Forest Ghouls can reproduce sexually with their own members. Forest Ghoul infestations are possible and the most reasonable way to get rid of them is to cut off their food supply, in which the ghouls would simply move to another location. If your the violent type, exterminate them until they leave but, don't be surprise if they as well become violent with you. In reality, Forest Ghouls are quite harmless if left alone or are respected correctly. 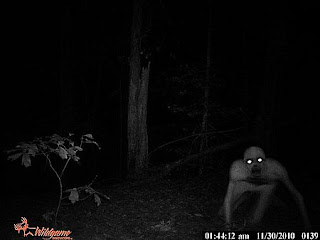 This is a photograph (shown above) of a Forest Ghoul hunting on the ground for food. This is a rare photograph as well because next to being shy, they're exclusive creatures and are rarely seen.
Posted by Shane Young at 11:26 AM No comments:

The element of fire is a destructive forced used by both humans and monsters to gain what they need to overcome challenges. Dragons use this element to kill predators,and humans, the dangerous of all monsters; use it to also exterminate any unwanted species. The Ash Rat is a species of fire-dwelling rodents that spread fires across forests, cities, and other environments that cause harm to societies and communities. Like the mythical Salamander, the Ash Rat nourishes off of the element of fire and the heat they produce, depending on how much temperature the creature has gathered, can ignite anything combustible. In appearance, the Ash Rat can come in three main colors of black, gray, or brown (indicating the amount of flame the creature had absorbed with brown being the healthiest and black the opposite). Ash Rats have orange/red eyes with yellow-colored, over-sized front teeth. Though these features can be visible, the rest of the body cannot due to the creature's ability to exude a cloud of sooty smoke from its body allowing the Ash Rat to hide in smoke from predators. The Ash Rat can reach up to two feet depending on how much heat is presented in their environment. Only a few predators are capable of consuming the Ash Rat such as predatory Salamanders, some species of dragons, and the Ashwinder, a species of snake that's born from magical flames. Like normal rats and snakes, the Ash Rat and the Ashwinder are mortal enemies. Humans must keep Ash Rat populations to a minimum due to their threat to human/animal safety. Cold is the only way to successfully kill an Ash Rat but, if the body is reintroduced to anything heat source, the rodent can be brought back to life. 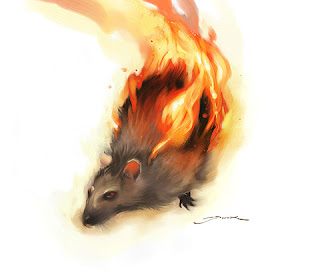 The Ash Rat (shown above) can become pets if kept in fireproof cages but, is only recommended for the highly experienced due to their molten lava-like bites which they can inflict on their owners.
Posted by Shane Young at 12:29 PM No comments: